A festival for refugees. A festival to welcome talents and solutions, no matter where they come from.

Sounds like coffee and cake, a chance for cross-cultural interaction - and lots of communicating through hand gestures. And you will indeed find that here on Sunday, the third and final day of the festival. But the professionals take the stage first. These are the people who hear more than just a buzzword when someone says “integration”. Four hundred experts from a wide range of sectors have come to attend the conference at the Arena Berlin. But they didn’t come just to talk about the problem; they’re here to talk about solutions.

Ashoka, which is a non-profit organization that connects social entrepreneurs across the globe, sent around the invitation to the Innovation Conference on Integration. The event is supported, for example, by the German Federal Ministry of the Interior, the German Federal Office for Migration and Refugees and the Robert Bosch Stiftung. Zalando came up with the idea of holding Hello Festival, instead of the first edition of Bread&Butter, at the event location Tempelhof since it turned into a refugee camp. The organizers thought that it seemed a logical choice given current events. The concept comes straight from the heart – or personal experience, to be precise. “We’re no experts on integration,” admits Dennis Hoenig-Ohnsorg, Teamlead Corporate Responsibility at Zalando. “But there’s one thing we know a lot about, and have the experience to prove it: Scaling.” 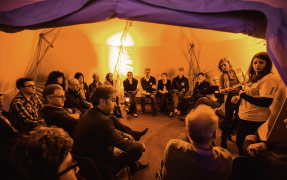 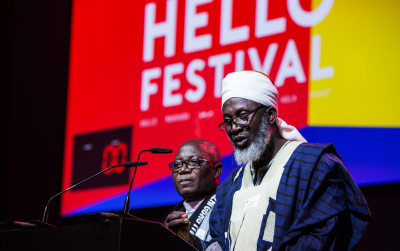 The basic idea behind the concept sounds rather simple: People have been fleeing to other countries much longer than the more recent move to Germany. “There’s no need to reinvent the wheel,” Hoenig-Ohnsorg adds. “If you look across the world, you will find so many good integration approaches with a proven track record of success. So we asked Ashoka to select the best of them and invite them to work in Germany, too!”

Today, on March 18, 2016, the minds behind these very solutions have come to Berlin to report on their experiences. Among the ranks is Mary Nally from Ireland, who founded Third Age, which trains people in retirement homes to serve as language tandem partners for refugees. Another guest is David Lubell, whose organization Welcoming America uses a multi-award-winning concept to advocate for a society that actively promotes migration and multicultural interaction. Then there is Inge Missmahl from ipso eCare, which trains refugees to help their peers deal with their experiences at a psychosocial helpline. The result? Mobile assistance for people in need – but also work and wages for the counselors. 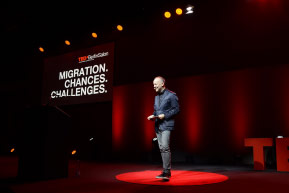 At the conference, Nally, Lubell, Missmahl and ten others offer their experience and know how to organizations that can apply for funding to implement the solutions in Germany and scale them by using their existing local structures.

But integration can only work if society accepts it. The biggest TedX event in Europe is scheduled to take place Saturday, when 1,500 speakers will talk about their experiences, including some of the social entrepreneurs from the Ashoka conference. Sunday will then focus on cross-cultural interaction with the “Football for All” tournament that will be accompanied by music and Syrian street food. It will bring Zalando employees, partners and players from local refugee initiatives together for a friendly competition that transcends borders.

~ EUR 250,000 were raised through
donations from visitors,
employees, corporate
partners and foundations

More than 3,000 people visited the
Hello Festival over
3 days

A FESTIVAL TO COME TOGETHER

Zalando teamed up with Ashoka and streetfootballworld for Hello Festival – a three day conference discussing solutions for successful migration and integration.

Everyone
Needs To Do
Their Bit

In addition to other steps Zalando has taken, the Hello Festival represents a clear public message: We welcome refugees.

HOENIG-OHNSORG: We shouldn’t underestimate how important corporate actions are. Almost 12,000 employees spend a majority of their time with us at Zalando – and the way we position ourselves as a company within society naturally has an influence on them. It’s quite simply part of our responsibility to be more courageous and take a clear position, like we did with Hello Festival.

Does this kind of commitment also translate into how corporate culture is practiced?

HOENIG-OHNSORG: People from more than 100 countries work for Zalando. Integration is absolutely an everyday affair here. We certainly saw this at the Hello Festival as well, where many employees got involved, either by contributing their professional skills or working as helpers on the ground. The response was so positive that we’re now going to organize a Hello Day every month when employees can spend a day volunteering at one of our partners. This isn’t limited to Berlin − it extends to our logistics hubs, too.

You are saying that the partnership with non-profit organizations has a long-term focus?

HOENIG-OHNSORG: Yes. Apart from Zalando, Ashoka has already taken the conference to other countries. A very similar event was held in Austria in November 2016, for example. Moving forward, we want to expand our social engagement from Germany in particular to our other locations, such as Dublin or Helsinki. But we would be thrilled if the initiative doesn’t have to be pushed centrally. Our employees often come up with the best ideas themselves. One Hack Week pilot project, for example, was an app for efficiently managing in-kind donations. Our goal is that CR and sustainability evolve from being important issues that we work on in selected teams to being deeply ingrained in each team’s DNA.

Discover how to do your bit for a better Zalando.